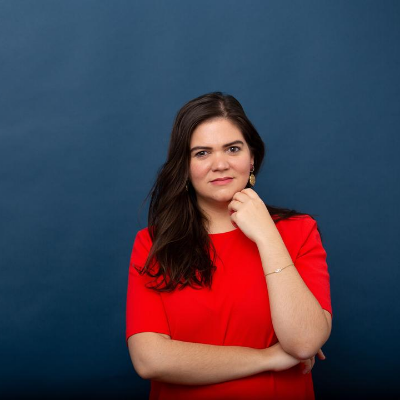 Lucía Gallardo is a Honduran serial entrepreneur building socially impactful emerging technology solutions to some of the world’s most pressing problems as Founder & CEO of Emerge. For its work, Emerge has been nominated for the 2018 Global SDG Awards and Newsweek’s 2019 Blockchain Impact Awards.

Lucía is on the Board of Directors of Penta Network, working on inclusive blockchain infrastructure; Rainforest Partnership, which promotes the conservation of the world’s tropical rainforests; the Caribbean Blockchain Alliance, to promote widespread adoption of blockchain across the Caribbean; and, Women Entrepreneurs Global, an innovation studio for the world’s female entrepreneurs. She also advises startups from around the world, including Xertify, Smartifice, Encuentralo504, Pocmi, Citizens for Citizens, Choco4Peace, and more.

Prior to starting Emerge and joining Penta, Lucia co-founded Dona un Libro, Cambia una Mente, a Honduran education focused non-profit and 2016 recipient of President Obama’s Young Leaders of the Americas Fellowship. Lucia has past experience in both the public and private sectors, ranging from immigration and trade relations on diplomatic missions to AI-enabled mobile tech and early-stage investments. Her academic studies took place at globally renowned McGill University, with studies in International Development, focused on creating economic opportunities in post-conflict, resource scarce, or poverty-stricken areas, as well as in International Trade & Business. Prior to this concentration, she also studied Communications Strategy.

Lucia is a 2017 Venture for Canada Fellow, a 2018 RBC Future Launch Fellow, a 2018 Money 20/20 Rise Up Fellow, and a certified UN SDG Advocate. Most recently, she was honoured as one of MIT Technology Review’s Latin American Innovators under 35 and a Royal Bank of Canada’s 2019 Women of Influence. She is Acquisition International’s North American Female Blockchain CEO of 2019. In 2020, Lucía has been nominated for Royal Bank of Canada’s Entrepreneur of the Year award and Future of Good’s 21 Founders to Watch.

We use cookies on our website to give you the most relevant experience by remembering your preferences and repeat visits. By clicking “Accept All”, you consent to the use of ALL the cookies. However, you may visit "Cookie Settings" to provide a controlled consent.
Cookie SettingsAccept All
Manage consent

Any cookies that may not be particularly necessary for the website to function and is used specifically to collect user personal data via analytics, ads, other embedded contents are termed as non-necessary cookies. It is mandatory to procure user consent prior to running these cookies on your website.